THE AQA-NINESTAR GROUP ACQUIRED THE MAJORITY OF PRINK SpA 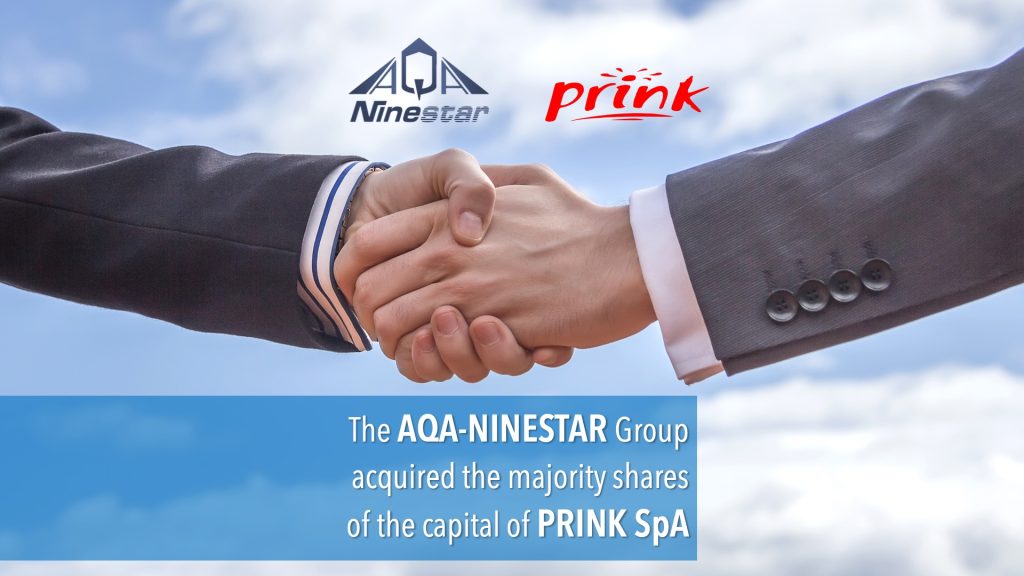 THE AQA-NINESTAR GROUP ACQUIRED THE MAJORITY OF PRINK SpA.

The AQA-Ninestar Group concluded on 20 April 2022 the acquisition of the majority stake of 51% of the share capital of Prink SpA.

The agreement provides that, on the date of execution, the AQA-Ninestar Group adopts the appropriate Governance measures to ensure the best organizational continuity for Prink SpA, with a view to optimizing the business model focused on the Printing sector both for peripherals and print consumables.

Diego Fontana commented: “The acquisition allows to consolidate the positioning of AQA-Ninestar on the Printing and ICT Consumer market and at the same time to enhance PRINK through the adoption of a strategy, which provides for new synergies, actions aimed at growth, innovation and to immediately control the new emerging markets.

With this strategic acquisition, the AQA-Ninestar Group expects a growth in consolidated turnover for the year 2022 close to 100 million euros in revenues.

This operation therefore represents both for the AQA-Ninestar Group and for Prink Spa, an important step in the strategy of expansion on international markets and strengthening the presence in the different reference markets.”

A world leading company in the sector of laser technology printing peripherals in the Consumer and Business segments through its brands Lexmark and Pantum, the AQA-Ninestar Group is 22.5% owned by the Chinese multinational Ninestar Image Tech Limited based in Zhuhai (Republic of China).

https://en.ninestargroup.com/ The multinational group Ninestar, in addition to being the fourth largest manufacturer of laser printers in the world, is also the first manufacturer in the world of compatible consumables alternative to OEM originals (ink-jet cartridges, toners, ribbons , label cassettes, inks) with the G&G brand https://www.ggimage.ink/ and dedicated chips for after-market consumables with the company APEX-MIC.

https://www.gruppoaqa.com/ The AQA-Ninestar Group has been present on the Italian market since 2005, as a distributor in the Printing sector with the offices in Casaletto Vaprio (Cremona) and the Cash & Carry in P.to Sant’Elpidio (Province of Fermo). A young company, characterized by a dynamic and flexible organization, focused on a very diversified distribution business model of quality consumables and consumer printers.

The ranking of the TOP 400 companies of the Confindustria of Cremona, sees the AQA-Ninestar Group among the “Best Jumpers” companies, that is companies that in their financial statements between 2019 and 2020 have made real leaps forward in the ranking of operations by development and quality of its primary indicators such as: turnover, profitability, core management, operating margin and organizational and operational efficiency.

A growth trend that has led the AQA Group to climb the ranking of 58 positions among the TOP 400 companies in the area, considering that 2020 was an exceptionally negative year for most companies, due to the negative effects of the pandemic from Covid-19 which led to a decline in revenues and margins.

The company Prink Spa with headquarters in Castelbolognese (Ravenna), present with 10 branches throughout Europe and with 1200 between shops and corner shops, today represents on the European market the group with the largest number of Affiliated Franchising Shops for the sale not only of consumer products in the IT sector, but also in high value-added services in the Telephony sector with the IRiparo brand: a hardware component repair service for smartphones and tablets.

Prink Spa brings together 280 employees and with a consolidated turnover in 2021 of 81 million euros.

THE AQA-NINESTAR GROUP ACQUIRED THE MAJORITY OF PRINK SpA

This website uses cookies to improve your experience while you navigate through the website. Out of these cookies, the cookies that are categorized as necessary are stored on your browser as they are essential for the working of basic functionalities of the website. We also use third-party cookies that help us analyze and understand how you use this website. These cookies will be stored in your browser only with your consent. You also have the option to opt-out of these cookies. But opting out of some of these cookies may have an effect on your browsing experience.
Necessary Sempre abilitato
Necessary cookies are absolutely essential for the website to function properly. This category only includes cookies that ensures basic functionalities and security features of the website. These cookies do not store any personal information.
Non-necessary
Any cookies that may not be particularly necessary for the website to function and is used specifically to collect user personal data via analytics, ads, other embedded contents are termed as non-necessary cookies. It is mandatory to procure user consent prior to running these cookies on your website.
ACCETTA E SALVA
Gestisci Consenso Cookie
Per fornire le migliori esperienze, utilizziamo tecnologie come i cookie per memorizzare e/o accedere alle informazioni del dispositivo. Il consenso a queste tecnologie ci permetterà di elaborare dati come il comportamento di navigazione o ID unici su questo sito. Non acconsentire o ritirare il consenso può influire negativamente su alcune caratteristiche e funzioni.
Gestisci opzioni Gestisci servizi Gestisci fornitori Per saperne di più su questi scopi
Visualizza le preferenze
{title} {title} {title}